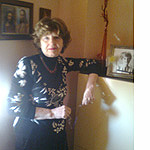 This email address is being protected from spambots. You need JavaScript enabled to view it.
http://www.uraniana.it

Dr. Lietta Catoni is Co-Founder and CoreMember of the IUF. First Udo Rudolph’s personal student and later his co-worker on three newsletters “Hamburg Leaves”, in 2005. Lietta attained a diploma of the Hamburg School Association and co-organized the first meeting of Uranian Astrology, in Bologna 2006 - the cradle of all IUF conferences. She’s of the Uranian Society (New York) and NCGR.

Lietta represents Witte’s Astrology in Italy as consultant and teacher. She published in the weekly magazine “A” edited by Rizzoli – “Corriere della Sera” (Milano) and on www.uraniana.it. For her researches of personality disorders, she collaborates with a psychotherapist. Lietta held lectures in New York and several European cities. She’s graduated in Economy and has taught Economy for many years.

In 2007th, Lietta was certifyied by Udo Rudolph to be the representative of the Hamburg School Astrology in Italy.