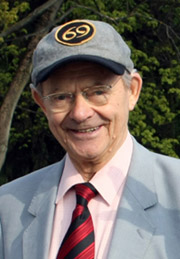 Dear members of the IUF,
dear friends of Udo Rudolph,

unfortunately, I have sad news for you. Udo is gone. He died on Monday October 13th, 2008.

My mother, in the neighbor-house, phoned him at 8:40 a.m. - she prepared his breakfast.

He was happy to hear her voice. Some minutes later, she looked for him. She found him dead. She called me on the phone and I ordered the emergency at 9:02 a.m.

12 Minutes later, I arrived at his home. The emergency car was already there. They tried to revive him. But he did it. He made his decision.

For Udo death or alive, that makes no difference. Both are full of tasks. Udo was prepared, he was ready. He's on his new path.

In front of his death, a virus weakened his body. I phoned him the evening before, he was happy that I will come the day after. I woke up at 5 o'clock, the sleep was gone. I knew, that I have to be prepared.

The message about Udo's death, was going around the world three times. I would like to thank all friends for the sympathy. Thanks for phones, emails and letters. I try to response soon as possible everything between America, Europe and Asia.

Special gratitude to Udo's and my personal friends. No-one has a doubt, the Conference "Hamburg 2009" will be successful. Udo was full of anticipation for "Hamburg 2009" and the conference will be also a place with memories for Udo.

Udo's burial will take place a small circle. Our Famile and his religious community be there.

We will honor Udo's significance for Uranian Astrology together, in our Conference "Hamburg 2009".

Today, I found in his Rulesbook the notice: "Carry on, don't see back!"

See you, with love,
Michael

P.S. Very special thanks to Alexander. Don't be shy, your help was particularly valuable.