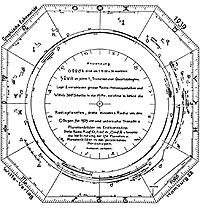 The graphic linear and circular ephemeris have a long and important tradition in the Hamburg School. While the graphic circle ephemeris (see left) gradually lost importance with the increasing computerization since the early 1990s, the graphic linear ephemeris remained an integral part of the Hamburg method - for 90 years now. Unfortunately, the lines and intersecting lines sometimes seem confusing to the untrained eye, while the application of the graphic ephemeris is incredibly simple and yet effective. Beginners, even without a formal education, can benefit greatly from the linear ephemeris after a short introduction. There is hardly any other prognostic method with which one can learn so quickly the analysis of the constellations in the radix, directed (or progressive) and transit. In 1926 Ludwig Rudolph presented a new development in his book "Das Linear- oder Streifenhoroskop und seine Verwendung" ("The Linear or Striped Horoscope and its Use"), which led to more order and more effective results in connection with the graphic linear ephemeris. He was convinced of his discovery and registered his development of a special measuring strip as a utility model with the Patent Office (DRGM No. 857709). Ludwig Rudolph on graphic representations in his writing:

"For the sake of simplicity and clarity, graphic works have long since been given their due place in the sciences and technology and, of course, should not be missing from serious astrological research.

The Hamburger Schule has paid special attention to these fields for a long time, and their successes and progress have been significantly influenced in a favourable sense. Also the calculations of the much disputed transneptunian planets have become possible only by means of the graphic way.

[...] The Hamburger Schule uses graphical representation of the celestial bodies for a period of 1 to 3 months at a size of 1 to 2 meters. Such designs [...] can, of course, only be dedicated to special purposes, but one can also take from them trigger constellations exactly to the hours of the day".

Since the early 1930s, but especially since 1936, Witte-Verlag has regularly published graphic circular and linear ephemerides in standardized form. An advertising leaflet showing four miniaturized linear ephemerides as pocket companions as well as a round graphic ephemeris has been preserved.

Ludwig Rudolph wrote here in his accompanying text: "What will the New Year bring? - Great news from the Witte-Verlag publishing house as the announcer of Alfred Witte's German cosmobiological idea! What kind of news? You will hear this from us on a case-by-case basis. Under the spring sun of the new year, the ice of the last two years will have melted to make way for a new life and movement in the Witte-Circle. Also the Rules Book will be expected again.

The former 90° linear ephemeris had a size of 30x60cm (today 21x29cm). They showed all Transneptunians as well as Pluto and indicated further on the line of the sun the moon phases. –